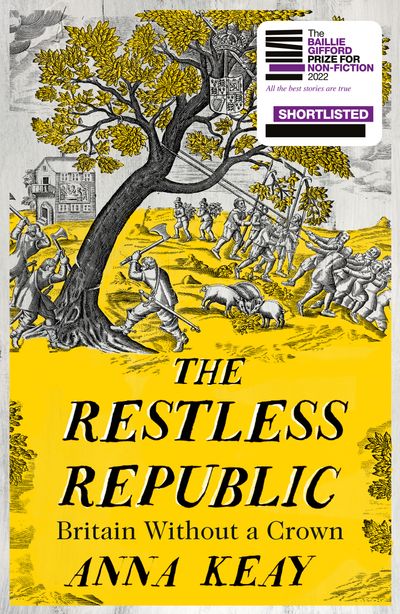 The Restless Republic: Britain without a Crown

‘Anna Keay has rescued a period of history which for many will have been uncharted territory … An imaginative triumph’ A.N. WILSON

In 1649 Britain was engulfed by revolution.

On a raw January afternoon, the Stuart king, Charles I, was executed for treason. Within weeks the English monarchy had been abolished and the ‘useless and dangerous’ House of Lords discarded. The people, it was announced, were now the sovereign force in the land. What this meant, and where it would lead, no one knew.

The Restless Republic is the story of the extraordinary decade that followed. It takes as its guides the people who lived through those years. Among them is Anna Trapnel, the daughter of a Deptford shipwright whose visions transfixed the nation. John Bradshaw, the Cheshire lawyer who found himself trying the King. Marchamont Nedham, the irrepressible newspaper man and puppet master of propaganda. Gerrard Winstanley, who strove for a Utopia of common ownership where no one went hungry. William Petty, the precocious scientist whose mapping of Ireland prefaced the dispossession of tens of thousands. And the indomitable Countess of Derby who defended to the last the final Royalist stronghold on the Isle of Man.

The Restless Republic ranges from London to Leith, Cornwall to Connacht, from the corridors of power to the common fields and hillsides. Gathering her cast of trembling visionaries and banished royalists, dextrous mandarins and bewildered bystanders, Anna Keay brings to vivid life the most extraordinary and experimental decade in Britain’s history. It is the story of how these tempestuous years set the British Isles on a new course, and of what happened when a conservative people tried revolution.

Author: Anna Keay
Format: Hardback
Release Date: 03/03/2022
Pages: 480
ISBN: 978-0-00-828202-8
Dr Anna Keay OBE read history at Magdalen College, Oxford and has a Ph.D. from Queen Mary, University of London. Formerly Curatorial Director of English Heritage she is now Director of the Landmark Trust. She has published and broadcast widely on British history and buildings, with a particular focus on the 17th century. She is a Trustee of the Royal Collection Trust, a Visiting Professor at Birmingham City University and has an Honorary Doctorate from the University of East Anglia.

The Restless Republic: Britain without a Crown

‘Anna Keay has rescued a period of history which for many will have been uncharted territory … An imaginative triumph’ A.N. WILSON

In 1649 Britain was engulfed by revolution.