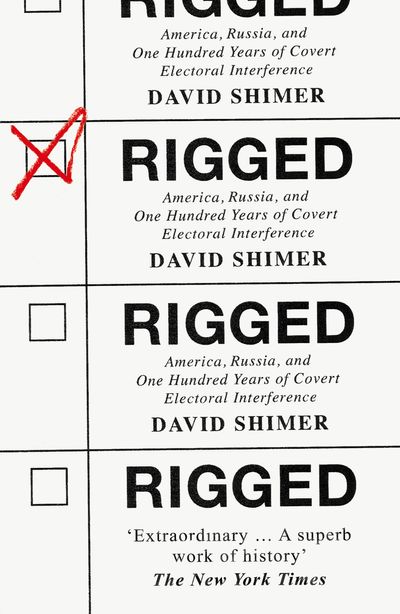 ‘This pioneering and judicious history of foreign intervention in elections should be read by everyone who wants to defend democracy now.’ Timothy Snyder, author of On Tyranny

The definitive account of covert operations to influence elections from the Cold War to 2016 – and why the threat is greater than ever in 2020.

Russia’s interference in 2016 marked only the latest chapter of a hidden and revelatory history. In Rigged, David Shimer tells the sweeping story of covert electoral interference past and present. He exposes decades of secret operations – by the CIA, the KGB, and Vladimir Putin’s Russia – to shape electoral outcomes, melding deep historical research with groundbreaking interviews with more than 130 key players, from former CIA directors to a KGB general.

What Americans should make of Russia’s attack in 2016 is still hotly debated, even after the release of the Mueller Report and years of media coverage. Shimer shows that Putin’s operation was, in fact, a continuation of an ongoing struggle, using familiar weapons radically enhanced by new technology. Casting aside partisanship and sensationalism, Rigged reveals new details about what Russia achieved in 2016, how the United States responded, and why Putin has also been interfering in elections across the globe in recent years.

Understanding 2016 as one battle in a much longer war is essential to understanding the critical threat currently posed to America’s electoral sovereignty and how to defend against it. Illuminating how the lessons of the past can be used to protect our democracy in the future, Rigged is an essential book for readers of every political persuasion.

Author: David Shimer
Format: ebook
Release Date: 30/06/2020
ISBN: 978-0-00-841582-2
DAVID SHIMER is pursuing a doctorate in international relations at the University of Oxford as a Marshall Scholar. His reporting and analysis have appeared in the New York Times, the New Yorker, and Foreign Affairs. He is an associate fellow of Davenport College at Yale University, where he received his undergraduate and master's degrees in history.

‘This pioneering and judicious history of foreign intervention in elections should be read by everyone who wants to defend democracy now.’ Timothy Snyder, author of On Tyranny

The definitive account of covert operations to influence elections from the Cold War to 2016 – and why the threat is greater than ever in 2020.