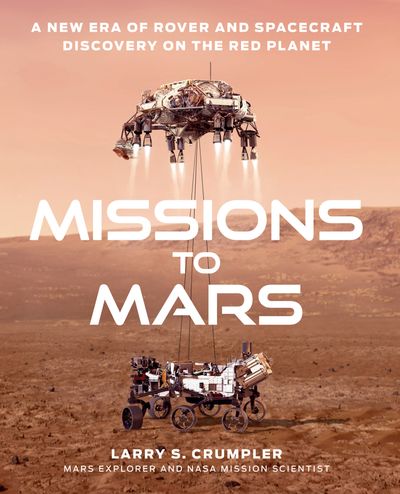 Missions to Mars: A New Era of Rover and Spacecraft Discovery on the Red Planet

From a long-term planning lead for the Mars Exploration Rover Project comes this vivid insider account of some of NASA’s most vital and exciting missions to the Red Planet, illustrated with full-colour photographs—a wondrous chronicle of unprecedented scientific discovery and the search for evidence of life on Mars.

‘There are probably just a few of moments in human history when a small group of humans stood on the margins of a vast new world, and it is no stretch of the romantic imagination that the arrival of two rovers on the surface of another planet was surely one of them.’

Human exploration of Mars is the most ambitious and exciting scientific goal of the 21st century, and few people on earth know as much about this fascinating planet as Dr Larry Crumpler. As one of the long-term planning leads for the Mars Exploration Rover Project, he helped control the daily communications between NASA and the rovers roaming the planet to gather scientific data.

In this magnificent compendium, Dr. Crumpler recounts the history of the Red Planet, from the earliest days when ancient astronomers turned their eyes to the heavens to the breakthrough discoveries being unearthed by modern technology today, including some of the first images from the latest rover, Perseverance. Paired with stunning, full-colour photographs taken by rovers and NASA satellites images, this magnificent “biography” of the red planet allows us to understand and experience it as never before.

When the Spirit and Opportunity Rovers landed on Mars in January 2004, scientists expected them to function for 90 days. But those three months turned into fifteen years. With data gathered by the rovers, Dr Crumpler and his team were able to reconstruct the planet’s stunning geological past, when it was once inundated with water, and perhaps could have supported microbial life. Dr Crumpler also reveals the joys and demands of life as a scientist taking part in these historic missions. Exploring fundamental questions about this remarkable planet that have intrigued us earthlings for years, Red Planet Renaissance illuminates Mars’ significance in the solar system—and the human imagination.

Author: Larry Crumpler
Format: Hardback
Release Date: 23/12/2021
Pages: 336
ISBN: 978-0-00-840726-1
Dr Larry Crumpler is currently the Research Curator of Volcanology and Space Science at the New Mexico Museum of Natural History and Science. As the long-term planning lead for the Mars Exploration Rover Project, during daily telecons Crumpler helped control and define the ongoing activities of the rovers on Mars. He is also a member of the Mars 2020 Perseverance rover and Ingenuity helicopter science team using the rover like a remote field geologist to map the geology along the rover’s traverse. A location on the planet—“Larry’s Lookout”—was named after Dr Crumpler in honour of his contributions to the Mars missions. He lives in Albuquerque.

Missions to Mars: A New Era of Rover and Spacecraft Discovery on the Red Planet

From a long-term planning lead for the Mars Exploration Rover Project comes this vivid insider account of some of NASA’s most vital and exciting missions to the Red Planet, illustrated with full-colour photographs—a wondrous chronicle of unprecedented scientific discovery and the search for evidence of life on Mars.