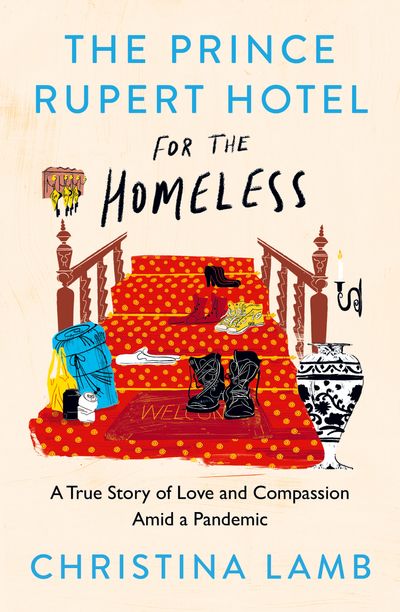 The Prince Rupert Hotel for the Homeless: A True Story of Love and Compassion Amid a Pandemic

‘There will be an avalanche of books about the pandemic. None will be as eye-opening or humane or moving as Lamb’s’ DAILY TELEGRAPH

A story of poverty, generosity and worlds colliding in modern Britain

When Covid-19 hit the UK and lockdown was declared, Mike Matthews wondered how his four-star hotel would survive. Then the council called. The British government had launched a programme called ‘ Everyone In ’ and 33 rough sleepers – many of whom had spent decades on the street – needed beds.The Prince Rupert Hotel would go on to welcome well over 100 people from this community, offering them shelter, good food and a comfy bed during the pandemic.

This is the story of how that luxury hotel spent months locked down with their new guests, many of them traumatised, addicts or suffering from mental illness. As a world-leading foreign correspondent turning her attention to her own country for the first time, Christina Lamb chronicles how extreme situations were handled and how shocking losses were suffered, how romances emerged between guests and how people grappled with their pasts together.

Unexpected and profound, heart-warming and heartbreaking, this is a tale that gives a panoramic insight into modern Britain in all its failures, and people in all their capacities for kindness – even in the most difficult of times.

Author: Christina Lamb
Format: Hardback
Release Date: 09/06/2022
Pages: 320
ISBN: 978-0-00-848754-6
Christina Lamb is Chief Foreign Correspondent at The Sunday Times. She has since been awarded Foreign Correspondent of the Year five times as well as Europe’s top war reporting prize, the Prix Bayeux and was recently given the prestigious Lifetime Achievement Award by the Society of Editors. She is the bestselling author of ten books including Farewell Kabul, The Africa House, and The Sewing Circles of Herat and co-wrote the international bestseller I am Malala with Malala Yousafzai and The Girl from Aleppo with Nujeen Mustafa. Her last book Our Bodies, Their Battlefields won the first Pilecki Institute award for war reporting and was shortlisted for Britain's top non-fiction award, the Baillie Gifford Prize, as well as the Orwell Prize and the New York Public Library Bernstein award. She is a Fellow of the Royal Geographical Society, an Honorary Fellow of University College Oxford and was made an OBE in 2013.

The Prince Rupert Hotel for the Homeless: A True Story of Love and Compassion Amid a Pandemic

‘There will be an avalanche of books about the pandemic. None will be as eye-opening or humane or moving as Lamb’s’ DAILY TELEGRAPH

A story of poverty, generosity and worlds colliding in modern Britain