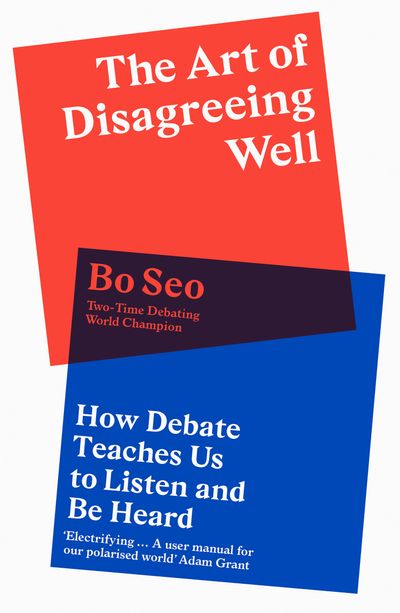 The Art of Disagreeing Well: How Debate Teaches Us to Listen and Be Heard

By a two-time debating world champion, a dazzling look at how arguing better can transform your life – and the world – for the better

Everyone debates, in some form, most days. Sometimes we do it to persuade; other times to learn, discover a truth, or simply to express something about ourselves. We argue to defend ourselves, our work, and our loved ones from external threat. We do it to get our way, or just to get ahead.

As a two-time debating world champion, Bo has made a career out of arguing. Over the past few years, however, he’s noticed how we’re not only arguing more and more, but getting worse at it – a fact proven by our polarised politics. By tracing his own journey from immigrant kid to world champion, as well as those of illustrious participants in the sport such as Malcolm X, Edmund Burke and Sally Rooney, Seo shows how the skills of debating – information gathering, truth finding, lucidity, organization, and persuasion – are often the cornerstone of successful careers and happy lives. Along the way, he provides the reader with an unforgettable toolkit to use debate as a means to improve their own.

This book is an everyperson’s guide to disagreeing well, so that the outcome of having had an argument is better than not having it at all. Taking readers on a thrilling intellectual adventure into the eccentric and brilliant subculture of competitive debate, The Art of Disagreeing Well proves that good-faith debate can enrich and improve our lives, friendships, democracies and in the process, our world.

Author: Bo Seo
Format: Hardback
Release Date: 09/06/2022
Pages: 352
ISBN: 978-0-00-849865-8
Bo Seo is a two-time world champion debater and a former coach of the Australian national debating team and the Harvard College Debating Union. One of the most recognized figures in the global debate community, he has won both the World Schools Debating Championship and the World Universities Debating Championship. Bo has written for The New York Times, the Atlantic, CNN, and many other publications. Currently, he is a juris doctor candidate at Harvard Law School.

The Art of Disagreeing Well: How Debate Teaches Us to Listen and Be Heard

By a two-time debating world champion, a dazzling look at how arguing better can transform your life – and the world – for the better