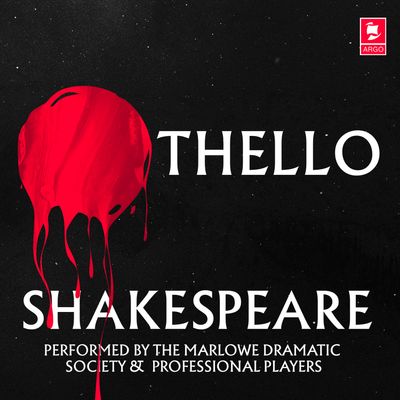 ‘O, beware, my lord, of jealousy;
It is the green-ey’d monster, which doth mock
The meat it feeds on.’

Othello follows the story of the Moor through love, jealousy and deceit.

Iago is furious about being overlooked for promotion and plots to take revenge against his General; Othello, the Moor of Venice. Iago manipulates Othello into believing his wife Desdemona is unfaithful, stirring Othello’s jealousy. Othello allows jealousy to consume him, murders Desdemona, and then kills himself.

All of the Shakespeare plays within the ARGO Classics catalogue are performed by the Marlowe Dramatic Society and Professional Players. The Marlowe was founded in 1907 with a mission to focus on effective delivery of verse, respect the integrity of texts, and rescue neglected plays by Shakespeare’s contemporaries and the less performed plays of Shakespeare himself. The Marlowe has performed annually at Cambridge Arts Theatre since its opening in 1936 and continues to produce some of the finest actors of their generations.

Thurston Dart, Professor of Music at London University and a Fellow of Jesus College Cambridge, directed the music for this production.